Since 2004, the Vitis Epicuria team has developed privileged relationships with some of the largest wine producers around the world, always striving to meet their requirements.. 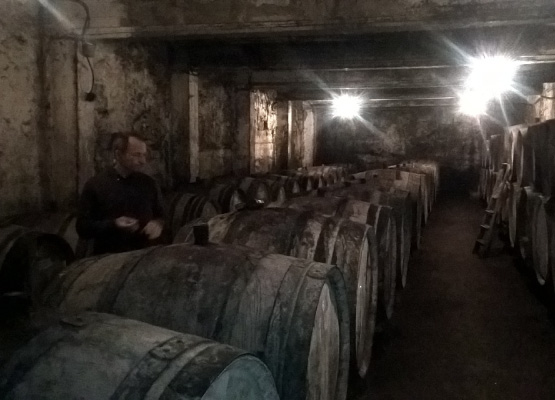 Among these producers, some do not wish to appear in our catalog, and you will therefore not find them on this site. Others agree to be included under certain pricing conditions. And most of them want to know the profile of the customers who buy their wines from us.

In particular, if you are looking for wines from the following estates, or from a few other prestigious estates, you can contact us directly to inquire about our availability, and the conditions that we could possibly offer you.

Our selection of Non-Catalog Domains

Vosne-Romanée is arguably the most prestigious wine-growing town in Burgundy, and surely one of the most admired in the world. Four of the six Grands-Crus of the town are Monopoles: La Grande Rue, La Romanée, La Tâche, and la Romanée Conti.

The sole owner of the last two is the Domaine de la Romanée Conti, under the management of Aubert De Villaine and his nephew Bertrand, who strive for perfection at all levels, from the vine to the cellar, including quality impeccable distribution.

In addition to the Grands-Crus Romanée Conti and La Tâche, the estate also offers us 4 Grands-Crus of the Côte de Nuits in red each year (Romanée-Saint-Vivant, Richebourg, Grands Echezeaux and Echezeaux), and sometimes a Grand Cru of the Côte de Beaune in white, the Montrachet.

This is the most famous estate in Châteauneuf du Pape, and perhaps even in the entire Rhône valley. After Louis Reynaud, then his son Jacques, it is now Emmanuel, Jacques's nephew, who controls the production and distribution of the Domaine's wines.

A great lover of Grenache, he transcends the expression of great wine with this single grape variety in an environment where some producers can blend up to thirteen.

Little color but so many aromas and finesse…! Emmanuel Reynaud's talent does not stop with the production of Château Rayas and we are fortunate to also enjoy the wines of Château de Fonsalette and Château des Tours which he produces with the same passion and the same success.

Henri Bonneau, who died in 2016, was a brilliant winemaker capable of producing wines with a unique personality, free from any fashion, trend or influence. He remains a legend for all wine lovers.

Far from the canons of modern oenology, its wines are characterized by great complexity and remarkable finesse, despite their deep concentration. While they can quickly appear spectacular, their aging potential seems endless.

Unfortunately, the different vintages are produced in very limited quantities, and are particularly difficult to find. They come from a vineyard of barely 6 hectares planted mainly in Grenache, with a complement of Mourvèdre and Cinsault. Since his death, his closest collaborator has managed the estate, striving to scrupulously respect a family tradition that has convinced enthusiasts the world over. As you might expect, vintages prior to 2016 are already collectors and are increasingly rare on the market.

After Didier's departure, his son Benjamin took over the torch of this illustrious estate in the Sancerre and Pouilly-Fumé region, which had gradually become a world benchmark for Sauvignon. Today, the wines produced are as precise and pure as ever, with a wild mineral profile that requires several years of aging before giving some of the most beautiful emotions that a white wine can offer… Do not hesitate to contact us to have this pleasure !

David Duband took over the family estate in the Hautes Côtes de Nuits in 1991 and gradually abandoned conventional agriculture, finally obtaining organic certification in 2006. He had then kept the family habit of completely destemming his grapes.

With the help of investor François Feuillet, he was also able to acquire a few additional plots to expand the estate.

It was not until 2008 that David Duband decided to take a strategic turn to favor vinification in whole bunches which today characterize the style of his wines, with gentle extraction and crushing at the end of fermentation which release the residual sugars from the still intact berries.

The wines are then aged in barrels, a third of which are new and lightly toasted. Bursting with aromas and structured around fine, powdery tannins, the estate's wines bear a strong signature but nevertheless remain well differentiated within the range. Faithful to their respective terroirs, they can age with great grace.

Thank you for your visit !

Sign up for our newsletter and receive a 10% discount on your first purchase!

I want to register